Situated in the historic fishing town of Inveraray on the banks of Loch Fyne, Samphire is a small seafood restaurant using locally sourced sustainable seafood and shellfish along with meat and game from the surrounding hills and glens.

Our goal is to showcase the finest produce Argyll and the West Coast has to offer while helping to support local small businesses and the fishermen and farmers who supply such amazing ingredients both caught and farmed on our doorstep.

Our aim at Samphire is to let the ingredients do the talking and let the main element of each dish shine through without overcomplicating or shadowing the fresh delicate flavours they each possess. From the hand dived scallops to the native Lobsters landed at the south end of Loch Fyne freshness is key and each dish has been developed to showcase and enhance the already delicious flavours of the sea and surrounding area.

Samphire is located to the south end of the Royal Burgh of Inveraray. The grade A listed building which was once a butchers shop and greengrocers has been tastefully renovated to a high standard giving Samphire a modern feel while still keeping in touch with its historic roots.

Samphire is situated 50 yards from the shores of Loch Fyne looks on to Relief Land which was once used to store salt used in the curing of Herring which was key in the prosperity and development of Inveraray in centuries gone by. Although fishing in the Town has declined substantially small independent fishermen and trawlermen are now reviving the industry and are an important part in allowing us at Samphire to provide customers with the freshest langoustines, scallops and lobsters possible.

Our goal is to continue showcasing the delicious seafood and shellfish Loch Fyne has to offer, which has been so important in sustaining Inveraray since the 18th century and in turn help us to promote the local business who supply our produce.

Here at Samphire our ethos is to provide the freshest seafood while respecting the sea and helping to sustain the fish stocks so that future generations can also enjoy the produce we are lucky enough to have today. The following List is provided by The Marine Stewardship Council and lists the species of fish which are currently viewed as sustainable. It is also our belief that practices such as, line fishing and hand diving although can increase cost are extremely beneficial to the surrounding marine life and will ensure that endangered species and the fishing industry can grow and thrive in years to come. 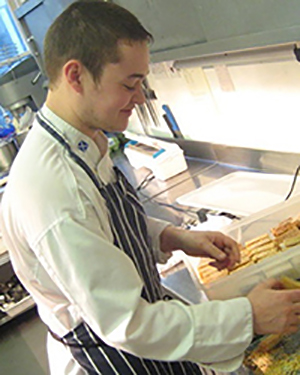 Inveraray born Andrew Maclugash has spent 14 years in the industry, developing his skills with some of the country’s top chefs including Michelin Star awarded Marcello Tully, Paul Sim and Roy Brett in restaurants from Scotland to London and aboard luxury cruise liners as far afield as the Caribbean. Andrew has been lucky to work in some of the country’s top restaurants where he honed his skill and was rewarded by being the very proud winner of “Young Scottish Hotel and Restaurant Chef of the Year” in 2010.

Andrew’s ambition was always to open his own restaurant in the town he grew up in. He wanted it to be something new to the area and a venue to showcase the diverse and top class produce Argyll has to offer while benefitting other local suppliers and businesses. This dream along with 14 years of planning led to the opening of Samphire.

When it comes to cooking, Andrew believes that the ingredients on the plate should speak for themselves and when using such amazing, local seafood the freshness and natural flavour should shine through, without the need for being over complicated. The contents of the sea are precious and the emphasis is on serving food as nature intended it to be enjoyed.

EXCELLENT Based on 248 reviews.

Morgan Renwick
My friends and I ate here on Saturday evening and it was incredible!!! The food was absolutely beautiful and the service from the two servers (don’t know their names) were so polite, friendly and helpful. Would highly recommend.

Luqman
Amazing! Had the pleasure of stopping at Samphire while visiting Loch Lomond. The chef prepared fresh fish batter for us on short notice due to diet requirements. The fish was perfect and crispy, simply amazing. Definitely worth a visit if you're in the area.

John G
Amazing food and service. Had the fish of the day which was sea bass and cooked perfectly. Big fan of the blood orange sorbet too!

Alan Ewart
I took my wife and son to Samphire for lunch today as a birthday treat for my wife. The food was absolutely fantastic, so fresh, and simply prepared, the food does the talking, especially the seafood platter. The chicken and duck liver pâté was the best I have ever tasted. The staff are really lovely, attentive and knowledgeable. A fantastic restaurant for a real treat. I would recommend booking ahead for lunch and this is absolutely essential for the evenings. Highly recommended and we will definitely be back.